We at The 4C Coalition will continue to surround our young people with love and the positive attention they so need.

We will continue engaging our communities and bringing the gospel of mentorship to all, we have changed lives!

None of this would be possible without you…our mentors, mentees, our staff, and the amazing funders, foundation, and faith leaders who support our mission.

At the recommendation of Pamela Kraus and Austin Dahl, we graciously accept this grant in the amount of $2,000. Your donation makes a difference for our community. For over 20 years we have been active in our Seattle community.

We believe in being a positive influence in the lives of developing youth, and we’ve witnessed firsthand how mentoring can effect change at a grassroots level.

Thank you for thinking of Clergy Community for Children Youth Coalition (4C) during these difficult times for youth and families. 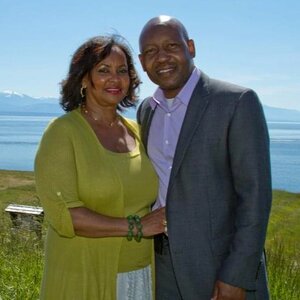 The Camerons give love and light everywhere they go. They lead an organization, Seattle Cares Mentoring, an affiliate of National Cares Mentoring, that focuses on healing and restoration in the Black community through evidence-based healing initiatives that unearth understanding, resilience, and faith.
The Camerons are active in the community, recruiting and training mentors to empower Black and Brown youth and their families, and that’s how I fell in love with their work.
They have taught me that it is all of our responsibility to instill hope and to give back to the community.
– Chericka Johnson, Churchome Director of User Engagement
https://www.churchome.org/bhm

“At this moment, then, the Negroes must begin to do the very thing which have they been taught that they cannot do.” I am a radical ― Carter G. Woodson

“History shows that it does not matter who is in power or what revolutionary forces take over the government, those who have not learned to do for themselves and have to depend solely on others never obtain any more rights or privileges in the end than they had in the beginning.”
― Carter G. Woodson, The Miseducation of the Negro

“I am moved and encouraged by the solidarity of people…”

At this moment I am experiencing grief, sadness, and anger over the death of George Floyd, and the continued killing, with no prosecution and no apology, to Black men, women, and children. The change and charges set against the other three Minneapolis police officers is a move in the right direction as black people unmantle systemic issues facing our communities.

Like most of you, I am outraged but encouraged by the powerful movement we see not only in Seattle and Minneapolis but across this country and world.

I am encouraged change will come if we do not let up… and we continue to protest, contribute and support organizations like My Brother’s Keeper Alliance Obama Foundation, Roland Martin Unfiltered, National CARES Mentoring Movement, Seattle CARES Mentoring Movement, Black Lives Matter Seattle King County, NAACP Legal Defense Fund, The National Urban League, or one of the many  African American organizations fighting for order and  justice.

I know the pain as a mother as I lost my Black son Glenn Page at the age of 23 due to  white men who assaulted him in which led to his death. It is taking years to fully charge the four white men who were charged with manslaughter and  took my son’s life.

I hurt for George Floyd’s mother and mothers of Trayvon Martin, Eric Garner, Michael Brown, and all other Black Americans who died at the hands of police. I am in full support of action to convict renegade police officers.

I am moved and encouraged by the solidarity of people, young and old, of all races Black, White, Latinos, Native American, and Asians who are on the streets coast to coast and even across the world. Change must come. Change in policies, changes in leadership, and system changes.

I am with all who are crying for justice and protesting injustice in policing, criminal justice, incarceration, under resourced schools, lack of quality housing, unequal health care, and inequality in employment opportunities.

I join my brothers and sisters in this time of change. I want to be part of the action to create change. 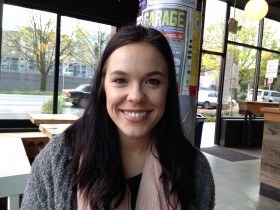 “I wanted to work with young girls because high school was a difficult time for me. I wanted to help young women learn how to be themselves, and be confident in who they are,” says mentor Maggie Dyer.

Five years ago Maggie attended a United Way presentation about volunteer opportunities. They mentioned mentoring resources listed on their website. Maggie clicked on the 4C Coalition.

“When I saw the 4C mentoring program, I felt like it was perfect for me. I went through the training, and then they matched me with Andrea. We hit it off pretty quickly. She was 15 at that time. I am 10 years older than she is,” reports Maggie.

Andrea’s mother has been in and out of her life and her sister has raised her and her five siblings. Her home life has been rocky at times.

“The cool thing about the 4C is that they don’t want you to be like another parent in the youth’s life. I think I have been able to help and coach Andrea not as an authority figure but more so as a peer: someone Andrea looks up to, who is setting a positive example for her.  I think I’ve been a stable person in Andrea’s life during a time where a young person needs stability the most. It feels good that I am able to be someone she can always count on,” says Maggie.

According to Maggie, Andrea, who is now 19 and a Garfield High School graduate, has always had a good head on her shoulders, and is very smart. “She’s a great girl. What she’s overcome in her life, and the outlook that she has on her life, is fantastic. I can’t really take any credit because she started out being a pretty terrific young lady. She’s even more amazing now.”

“Mentoring Andrea has been an incredible experience. I have gotten to know someone who I now consider family, someone who I would drop anything for. It’s a nice feeling knowing that Andrea feels the same way. We are both very grateful to have found each other through the 4C.” 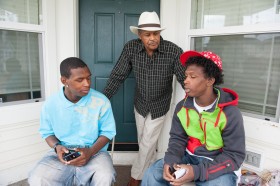 At church, seven years ago, Gary Tillery, listened to a presentation about 4C’s mentoring program. Gary, retired after 26 years as a supervisor at Boeing, decided he’d give mentoring a try.

After the training, Gary waited two nerve-racking months before being assigned a mentee.

Gary laughs when he says, “during the waiting period, I became very anxious about the commitment … I wasn’t sure that I would be up to the task. I thought that maybe when they called me with a mentee, I just wouldn’t answer the phone.”

4C finally called to let Gary know that they had found a good mentee match for Gary.

“My assigned mentee had a twin brother. Another man was going to take the other twin but he backed out. I felt bad for the other twin, so I agreed to mentor both of these kids,” states Gary.

“It is important to meet these kids at their level, but you have to be careful that you’re not their friend — you are their role model. I had to learn this the hard way. At first, in an effort to relate to them I became more of a pal to them,” admits Gary.

According to Gary, “you cannot be a total authoritarian person because they’re going to resist that. You need to find a way to balance the two approaches. And, of course, every kid is different so you have to be tuned in to them.”

Gary sites two specific impacts he’s had on the boys. “I taught them one of the most basic things —being on time. It’s an educational tool that you do to make your life a lot easier. I stayed on them constantly about being on time, and they eventually got it.”

Another specific impact was on one of the twins, a big strong guy, who could not seem to stay out of fights. Gary kept telling him to hang up his boxing gloves. Turns out this boy moved out of the area, and one day out of the blue, Gary gets a call from the boy, and the first thing he tells Gary is “I finally took your advice and I’ve hung up my gloves.”

Says Gary, “a mentor has to learn as you go along. I can’t give you a map or a book that can lead you down the path, you have to play it by ear. Oftentimes, they just need someone to talk to. The important thing is to be there for them.”

College is Next for Savannah

One of our mentees, Savannah, was the valedictorian for the 2015 graduation class at Rainier Beach High School in Seattle. She has been mentored by Meghan Arbuckle since she was a 16 year old high school sophomore. Savannah is planning on going to college and we at the 4C Coalition are helping her navigate the college application process.

Two years ago Savannah traveled with Seattle’s 4C Coalition to Washington DC for the 50th anniversary March on Washington Memorial Youth Mentoring Summit. As if that participation wasn’t enough to do Seattle proud, Savannah then did one better and won first place in the “Spell it Like it Is” Spelling contest.

About the Washington DC experience, Savannah said, “I felt honored to be able to walk the same streets as people I look up to as heroes, such as Martin Luther King Jr., Barack Obama, former presidents, and congressmen and women.”

“Also, being in Washington, D.C. gave me a new perspective on life because I saw that even though we’re so far apart, Washington, D.C. and Seattle are more similar than different.  For example, Washington, D.C. having the history it has, I was surprised to learn that it has just as much poverty as Seattle.”

Savannah also participated in 4C Coalition’s Pen or Pencil group mentoring program that focuses on connecting young people with the educational system (the pencil) to head towards success and keep them out of “the pen.”