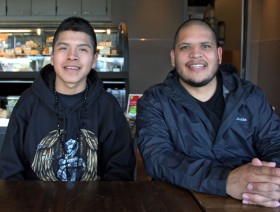 Juan Carlos, 14, rarely attended school and soon found himself identified as being truant.

While attending this workshop Juan’s parents met Diana Parra, Truancy Workshop Coordinator, in the King County Prosecutor’s Office. Diana listened to the parent’s concerns and thought Juan could really use a mentor.

The parents agreed and a referral was made to the 4C Coalition Mentor Program. The 4C personnel matched Juan with Bobby Cruz. Bobby meets with Juan every Monday, and has committed to mentoring Juan for at least one year.

Bobby was truly a blessing for Juan and his family. Bobby really enjoys working with youth and he speaks fluent Spanish. He is motivated to give back because he sees himself, and his childhood in Juan.

Being able to communicate is key in any relationship, but in this instance it was critical. Mom and dad do not speak English and found many barriers when advocating for their son.

Juan subsequently fell between the cracks. Juan never attended school more than two days in a row. Bobby began to work with Juan and his family to identify attainable goals.

To help Juan take steps towards achieving his goals, Bobby knew he would have to advocate for Juan and his parents. Bobby attended meetings with school faculty and helped Juan’s parents communicate their concerns and need for Juan to transfer to an alternative high school. Bobby helped the parents complete enrollment forms as well.

Prior to attending New Start, Juan had acquired zero credits and his attendance was poor at best. With the support of his mentor, his attendance has improved significantly, and Juan passed all of his classes both spring and summer school. He now has over three credits.

Bobby is Juan’s greatest champion, and continues to push Juan towards reaching his goals. Bobby’s support and advocacy for Juan, and his family, has been instrumental in helping Juan reclaim his future.

Since being matched with a mentor, Juan has become a better citizen, son and student. He smiles more, and according to his parents is willing to help out around the house.

Juan looks forward to his Monday mentor meetings with Bobby. They talk about life and share laughs.

Juan loves to play soccer and it is a common interest he shares with his mentor. Playing soccer is one way this mentee/mentor duo have fun.

Bobby shows up to support and even jumps in from time to time. Bobby uses soccer a tool to connect with Juan. He finds teachable moments and asks open ended questions.

Thanks to Bobby’s help, Juan is well on his way to achieving his goals.

College is Next for Savannah

One of our mentees, Savannah, was the valedictorian for the 2015 graduation class at Rainer Beach High School in Seattle. She has been mentored by Meghan Arbuckle since she was a 16 year old high school sophomore. Savannah is planning on going to college and we at the 4C Coalition are helping her navigate the college application process.

Two years ago Savannah travelled with Seattle’s 4C Coalition to Washington DC for the 50thanniversary March on Washington Memorial Youth Mentoring Summit. As if that participation wasn’t enough to do Seattle proud, Savannah then did one better and won first place in the “Spell it Like it Is” Spelling contest.

About the Washington DC experience, Savannah said, “I felt honored to be able to walk the same streets as people I look up to as heroes, such as Martin Luther King Jr., Barack Obama, former presidents, and congressmen and women.”

“Also, being in Washington, D.C. gave me a new perspective on life because I saw that even though we’re so far apart, Washington, D.C. and Seattle are more similar than different.  For example, Washington, D.C. having the history it has, I was surprised to learn that it has just as much poverty as Seattle.”

Savannah also participated in 4C Coalition’s Pen or Pencil group mentoring program that focuses on connecting young people with the educational system (the pencil) to head towards success and keep them out of “the pen.”