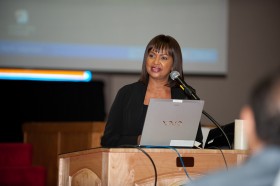 As we reflect on the many things we achieved in 2014 and look ahead into the remaining months of 2015, we’re excited to share some 4C Coalition accomplishments and news with you.

With help from United Way Volunteer Impact and 501 Commons in 2014, we wrote our skill-based volunteer induction manual. The manual provides job descriptions for skilled volunteers to assist us with social media, office administration, and program management.

Contributions from United Way also helped us develop a girls’ group. Employee Olivia Ford—who was once a 4C mentee herself—wrote the grant application (her first) and developed the group. The girls’ group invited young women to create a dream board and reflect upon their future goals while also learning about the history of Martin Luther King and civil rights.

Last year, we traveled with eight youths and five mentors to the National Black Criminal Justice Youth Mentoring Summit in Orlando, Florida. While there, we were wowed and proud to witness one of our youths win the summit’s youth spelling contest! Another of our youths who attended met with leaders from the federal government and sat on a panel with fellow African American youths from across the country, dignitaries from the State Department, judges, and criminal justice experts.

The 4C recently launched a database project to review and track the youths we serve. This database will help tell a statistical story to donors, funders, and policymakers about the work we do in the community.

END_OF_DOCUMENT_TOKEN_TO_BE_REPLACED

Sally Clark, Seattle City Council President, highlighted the great work of one of 4Cs mentees in a recent blog post. The full article is below (Sally’s Blog, Original Post).

When I meet with young people or have interns in the office I invariably tell them to keep honing their communications skills. Different fields need different specialized skills, but all fields need strong communicators. And, so, I’m pleased to spotlight up and coming strong communicator Savannah B, a junior at Rainier Beach High School.

Savannah recently travelled with Seattle’s 4C Coalition to Washington DC for the 50thanniversary March on Washington Memorial Youth Mentoring Summit. As if that participation wasn’t enough to do Seattle proud, Savannah then did one better and won first place in the “Spell it Like it Is” Spelling contest.

Savannah participates in the 4C Coalition’s Pen or Pencil group mentoring program, a program that focuses on connecting young people with the educational system (the pencil) to head towards success and keep them out of “the pen.”

I recently had a chance to e-mail Savannah about her success.

How did it feel to be in Washington, D.C.?
I felt honored to be able to walk the same streets as people I look up to as heroes, such as Martin Luther King Jr., Barack Obama, former presidents, and congressmen and women.

Also, being in Washington, D.C. gave me a new perspective on life because I saw that even though we’re so far apart, Washington, D.C. and Seattle are more similar than different.  For example, Washington, D.C. having the history it has, I was surprised to learn that it has just as much poverty as Seattle.

It was also a nice experience being in the competition with many different educated young people from around the country, but to me the experience was more about Washington, D.C., the city itself.

What’s your favorite part of the Pen or Pencil Group Mentoring program?
I enjoy coming together with the young and elders of our community.  Although we think we know a lot, we learn something new no matter how young or old we are.

What’s your favorite subject at Rainier Beach? Why do you like it?
IB (International Baccalaureate) Math Studies. It’s a little bit of geometry, a little bit of algebra. I like it because of the teacher, he’s cool. I like the way he sets up the classroom; we sit in groups instead of rows.

Winning makes me feel more confident in myself.

It makes me want to more seriously pursue playing basketball and my dream of becoming a pediatrician.

Congratulations again, Savannah!  If you’re interested in being part of the Pen or Pencil Mentoring Program visit the 4C Coalition –